Third International Technology Forum Digital Bridge: How it was

On October 27-29, the Digital Bridge International Digitalization Forum once again brought together representatives of the Kazakhstani and international IT communities on one platform. Within the framework of the forum, IT startups received more than $250,000 for the development of projects. 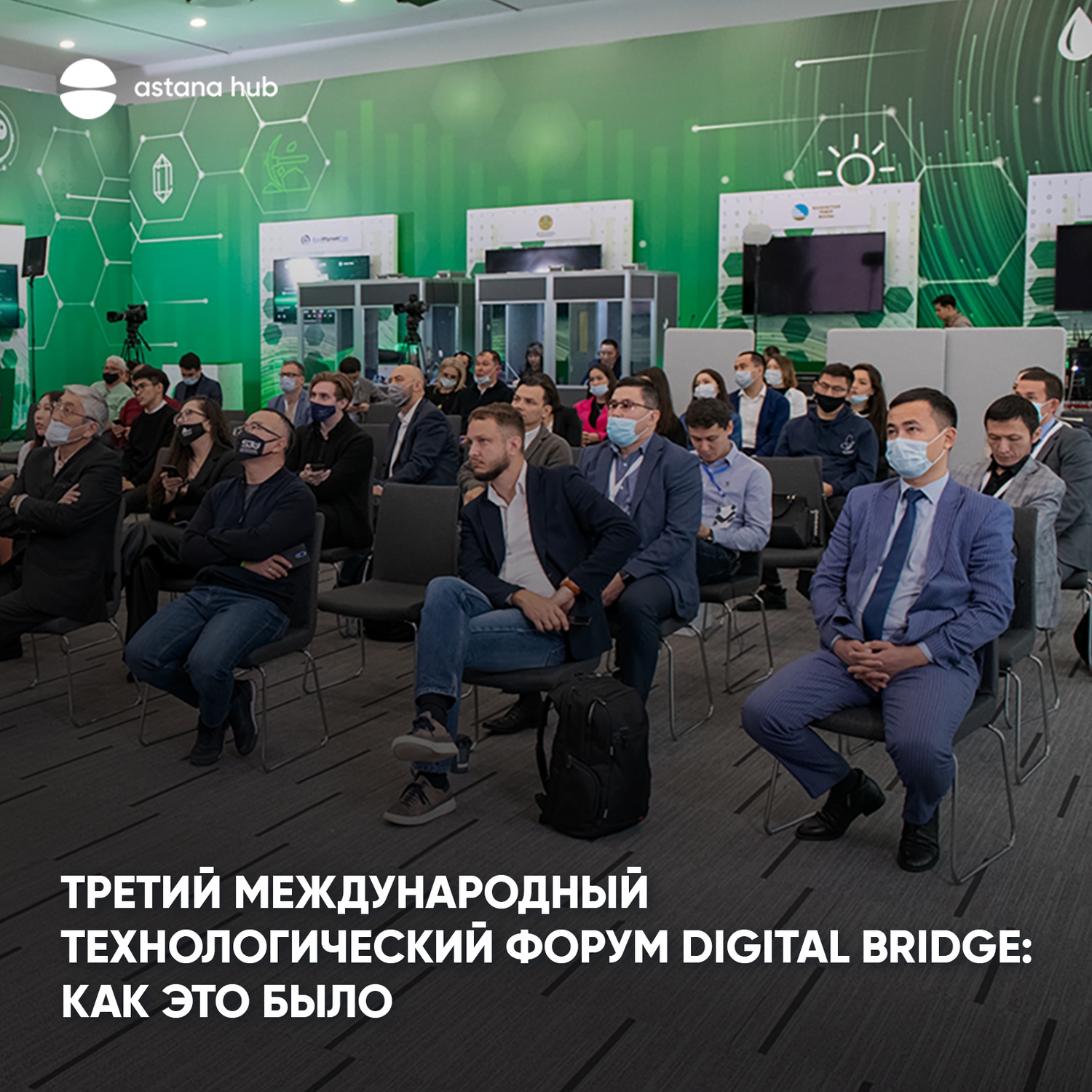 At the forum, Minister Bagdat Musin presented the national project "Technological breakthrough through digitalization, science and innovation" to the IT community, signed a number of agreements on the development of promising IT projects, and also handed checks to the best IT startups for the development of their projects and vouchers for training in IT specialties.

The event was organized by the Ministry of Digital Development, Innovation and Aerospace Industry of the Republic of Kazakhstan, the Zerde National Infocommunication Holding JSC and the international technopark of IT start-ups Astana Hub.

The first day of the event was attended by Head of State Kassym-Jomart Tokayev, senior staff of the Presidential Administration, Prime Minister Askar Mamin, members of the Government and heads of state bodies.

During the visit, the President was presented with an alley of startups and told about the current activities of the Astana Hub IT ecosystem. Then, under the chairmanship of Kassym-Jomart Tokayev, a meeting of the Commission on the implementation of digitalization was held.

The forum participants were welcomed by Minister Bagdat Musin, who spoke about the situation in the industry, digitalization and new projects.

At the same time, within the framework of the forum, agreements were signed between the ICRIAP of the Republic of Kazakhstan and HUAWEI, Galam LLP and OneWeb, Astana Hub and MTS, as well as a trilateral memorandum between Astana Hub & Silicon Valley accelerator Plug and Play Kazakhstan & Transtelecom.

As part of the Plug and Play Kazakhstan cooperation, a corporate accelerator has been launched, where 20 domestic IT startups will have the opportunity to upgrade team skills under the mentorship of experts from Silicon Valley. And the MTS StartUp Hub Innovation and Investment Center will help open a 5G Center in Nur-Sultan on the territory of the Astana Hub to select, test and refine solutions for technology companies and startups in Kazakhstan on fifth-generation networks.

Traditionally, at the Digital Bridge site, technology startups competed in the Astana Hub Battle for two days. This year, more than 250 applications were accepted for participation in the Astana Hub Battle, and 89 companies presented their startups live to a competent jury. According to the results of the competition, the top three young IT companies were determined. Among them:

1st place - startup Oquda - the first Market Network platform in the industry of recruiting students to foreign universities. The platform organizes the work of specialists around the world to make foreign education available to one buyer.

2nd place - startup Parqour - a smart parking system that recognizes 99% of numbers, automatically calculates the cost of parking and allows you to pay via QR_code, or through mobile applications of different banks.

3rd place - startup UvU - a mobile application for the safe transportation of children with a smart system of joint trips.

The forum also announced the winners of the contest for funding Seed Money from Astana Hub. Young IT companies Parqour, Kids Security, SipSim, FlowSell.me, Oqylyq.kz received checks for 20 million tenge to further develop their startups. The ceremony was attended by the Minister of Digital Development, Innovation and Aerospace Industry of the Republic of Kazakhstan Bagdat Musin, as well as the CEO of Astana Hub Magzhan Madiev. In addition to funding, the winners of the competition will receive additional support in the form of a free workspace, training and mentoring, access to investors and a community of 500 IT companies, tax and visa preferences, and PR support.

The Minister of Digital Development, Innovation and Aerospace Industry of the Republic of Kazakhstan Bagdat Musin presented IT vouchers in the amount of 600 thousand tenge to the first five winners of the competitive selection for training in IT specialties under the Tech Orda program.

IT vouchers are aimed at implementing the instructions of the President of the Republic of Kazakhstan, Kassym-Jomart Tokayev, to train 100,000 high-class IT specialists.

“Today we are awarding the first five IT vouchers. It is important for us to nurture and strengthen the Kazakh IT sector. The country needs young, educated, motivated specialists. By 2025, we plan to issue 20,000 IT vouchers. This will allow us to increase the number of highly qualified personnel in the IT sector who will be able to create high-quality projects in the future,” said Bagdat Musin, Minister of Digital Development, Innovation and Aerospace Industry of the Republic of Kazakhstan.

The program is implemented by the Astana Hub Technopark with the support of the Ministry of Digital Development, Innovation and Aerospace Industry of the Republic of Kazakhstan and provides an opportunity for Kazakhstanis to receive funding for training in IT specialties in the amount of 600,000 tenge. In 2021, the program launched for the first time and will provide 100 Kazakhstanis with a quota for education in leading programming schools. 13 IT schools throughout Kazakhstan (Nur-Sultan, Shymkent, Almaty, Karaganda, Uralsk, Semey, Aktau) are participating in the program.

“This year, Digital Bridge 2021 brought together more than 70 speakers from Kazakhstan, Russia, Belarus, the USA, Indonesia and 5,000 participants. For the first time, the forum was held in a hybrid format - about 1,000 participants attended the forum live and more than 4,000 joined online from all over the world. The forum hosted both official meetings at the highest level and a number of informal events of the IT community. The forum gave a new impetus to the development of the IT industry,” said Magzhan Madiev, General Director of the Astana Hub Technopark.