After welcoming the participants, Kassym-Jomart Tokayev noted that the annual Forum Digital Bridge had become a large and prominent regional platform within four years. 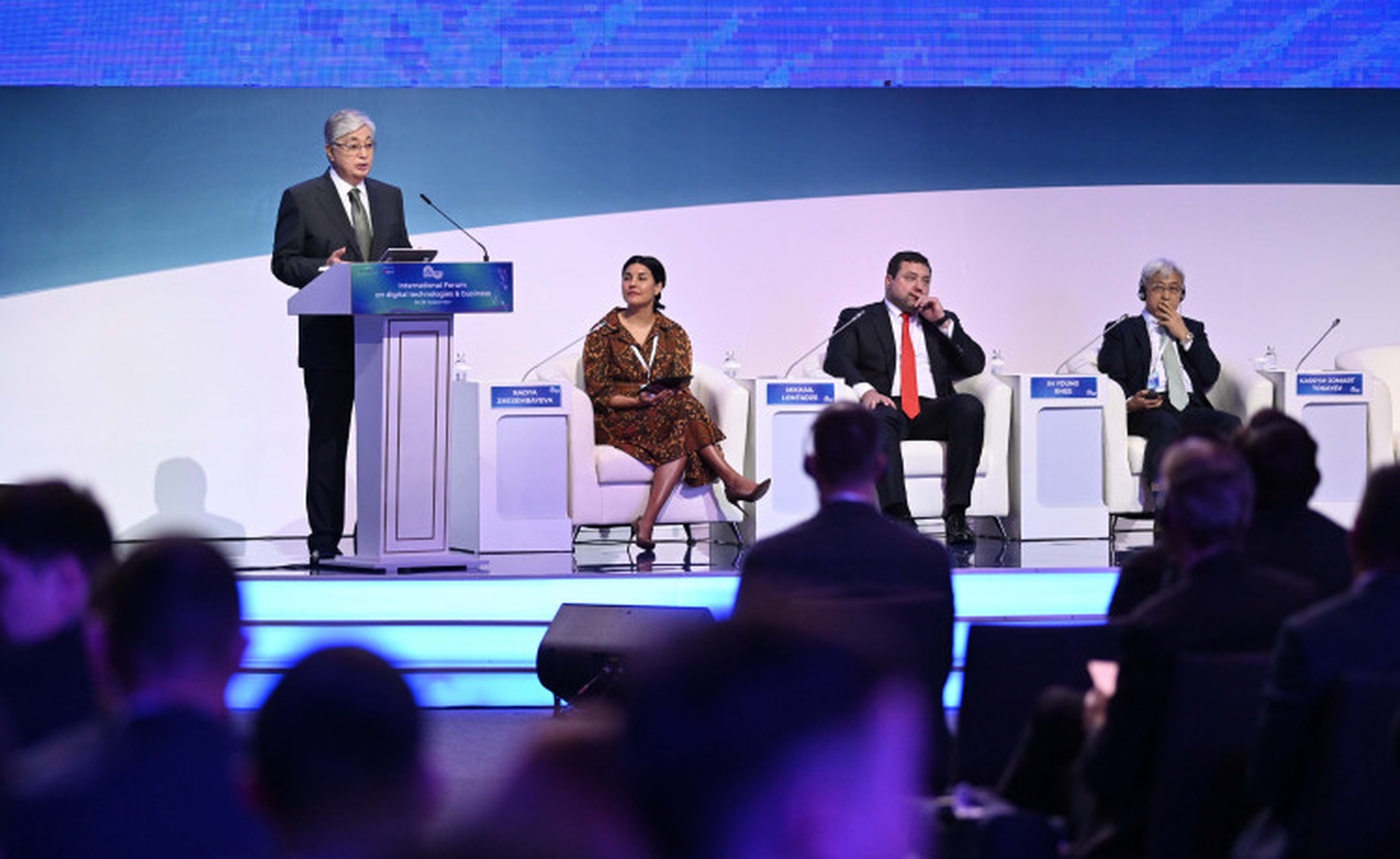 According to the President, experts believe that in ten years, up to 70% of the world's products and services will be based on digital platform models. Under these conditions, Kazakhstan has set itself the strategic task of becoming one of the largest digital hubs in the Eurasian space. As stressed by the Head of State, today, our country is in the top 30 of the UN rating of the most digitized states, outperforming many developed countries. Nevertheless, there is much work to be done on the further digital transformation of Kazakhstan, the priorities the President outlined in his speech.

- First. The development of human centricity. First of all, the state needs digital technologies to ensure the economy's competitiveness, develop new types of goods and services, and introduce Fintech and Industry 4.0. However, one of the significant priorities is also the Government to citizens, that is, the provision of services. By adopting digital technology, we intend to make everyday life as easy as possible for citizens and to achieve equal opportunities for all. To achieve this, we will implement an entirely new digital government model, Invisible Government. Its principle is that the main focus of government policy is on people, their needs, and interests. The state's wide array of measures and decisions is not visible to the citizen - he sees only a specific result. Therefore, all state services are converted to electronic format as much as possible, excluding all bureaucratic procedures," noted Kassym-Jomart Tokayev.

According to him, in our country, more than 90% of public services are already implemented in electronic format, which is one of the highest rates in the world. Constructive interaction with the private sector has been established. In particular, Kaspi, Halyk, BI Group, and other companies provide access to public services through their platforms.

- Today, Kazakhstan is one of the few countries that have fully implemented digital documents. As a result, our citizens are not required to carry and present an ID card, driver's license, graduation diploma, marriage certificate, and 15 other documents. This work will continue, and the state will be proactive in its relations with citizens and businesses. A "Digital Family Map" is being introduced, which analyzes more than 80 different parameters in real-time. It allows us to promptly, without unnecessary bureaucracy, help families who find themselves in a difficult life situation. The most significant aspect is that this technology allows for the transition to targeted social support. "The administration must launch this digital service by the end of the year," the President directed.

The second priority Kassym-Jomart Tokayev called for the creation of favorable conditions for the IT industry. In his opinion, Kazakhstan has created very good conditions for developing the IT sector. It concerns the regulatory framework and special platforms with unique regimes and tools for developing IT business. Astana Hub, an International technopark for IT start-ups, has a special tax and visa regime. More than 900 companies have already become residents and successfully work in the Kazakhstani and international markets.

- Recently, in the U.S., I held meetings with executives from Microsoft, Epam, and Coursera. Specific agreements were reached on deepening cooperation and localization in Kazakhstan," the President noted.

Kazakhstan will also continue to modernize its IT infrastructure on a significant scale. According to the state leader, the work on the trans-Caspian area with the Azerbaijani partners started connecting to the world centers of traffic concentration. We are talking about South-East Asia and Europe. Additionally, the Kazakh market is attracting major cloud computing players, such as Microsoft Azure, Amazon Web Services, and Google Cloud.

- For our country, about 40% of the population lives in rural areas, and providing all citizens with affordable and quality Internet is an urgent issue. The Ministry of Digital Development should intensify its efforts to cover the most remote villages with the networks of low-orbit satellite systems SpaceX and OneWeb," Kassym-Jomart Tokayev emphasized.

Separately, the President addressed the problem of human capital development. He said the world's IT market needed 30 million specialists two years ago. Today, the need is already 100 million, and by 2025 it will increase to 200 million. Therefore, Kassym-Jomart Tokayev stated the need to prepare at least 100 thousand highly qualified IT specialists by 2025.

- During a recent business trip to New York, I met with our young compatriots, representatives of the Digital Nomads IT community. They work in the largest companies in the United States and Europe and are globally competitive. Many talented people are working in Kazakhstan today, too, and they are capable of creating products on a global scale. That is why I set a task for the Government: on the one hand, to support young people wherever they work, and on the other, to involve them in the digitalization of our country as much as possible," said the Head of State.

He emphasized that unhindered knowledge exchange is more important than ever before in a modern information society and digital economy conditions. Kassym-Jomart Tokayev is convinced that new ideas and breakthrough projects can emerge only in a free and harmonious society.

- The flourishing of the information civilization has already spawned such a phenomenon as digital nomads. Modern digital nomads are mastering the global cyber- and physical space, creating new products and markets. I am confident that the productive exchange of opinions at today's Forum will make it possible to outline the contours of the region's digital future and lay the foundation for the implementation of breakthrough initiatives in the Eurasian space," the President concluded his speech.