Following the press tour organized by Freedom Holding Corp. in October, La Vanguardia (Spain), Le Monde (France), and Berliner Zeitung (Germany) published articles on Kazakhstan, in particular on the role of the Astana Hub in the country's economy. 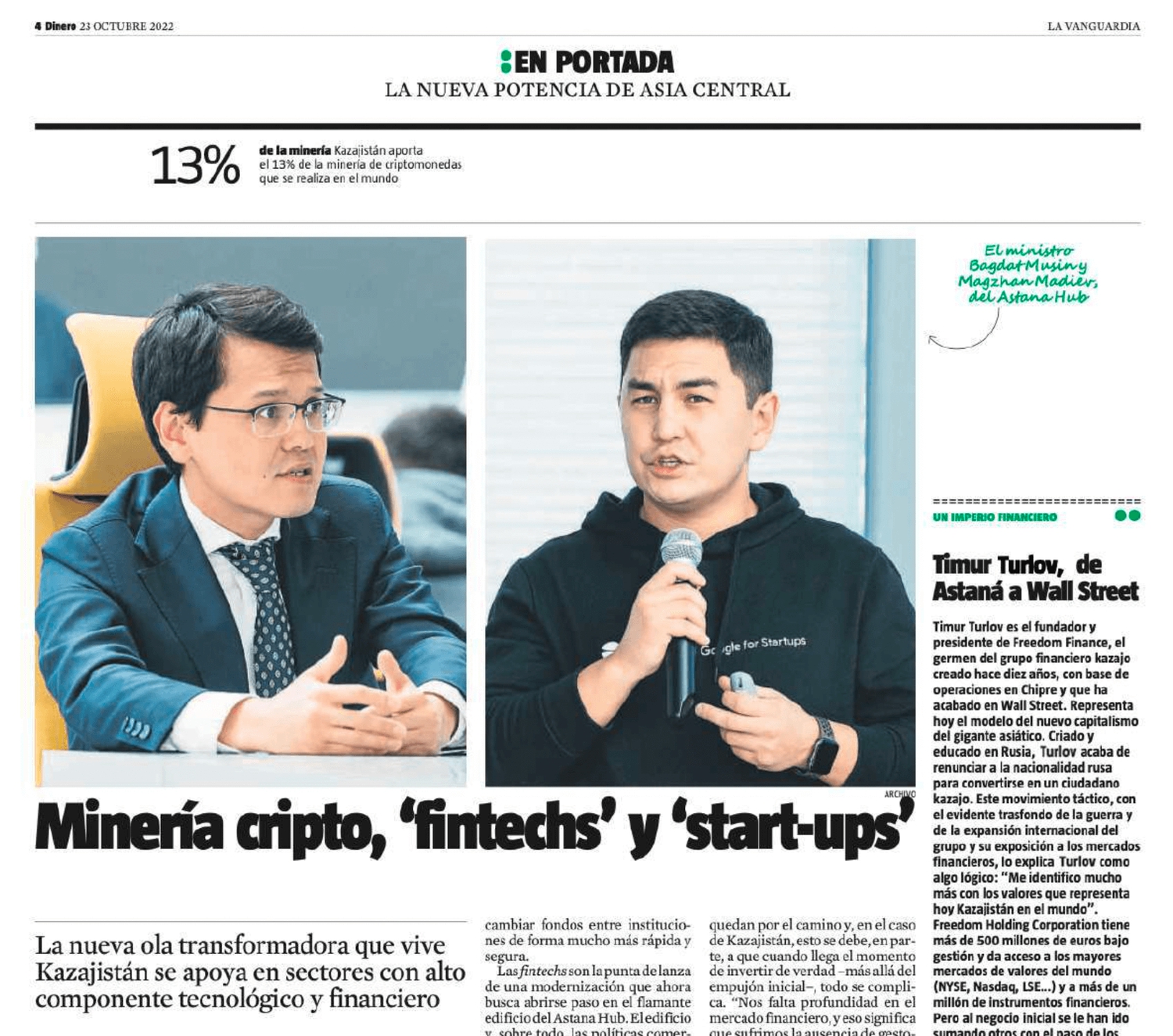 One of the most popular newspapers of Catalonia, La Vanguardia, published columns "Kazakhstan is looking for its place on the map" and "Cryptocurrency mining, fintech, and startups”. Lalo Agustina, a journalist for the publication, notes:

“Fintech is the vanguard of modernization, which now seeks to make its way into the new Astana Hub building. The building and, above all, the current commercial policies are the closest thing to an immense runway ready to attract capital. It has everything from an expat center to tax incentives, access to early-stage funding, and networking to attract capital. In just four years of operation, 900 companies have become participants in the tech hub, of which 160 are foreign, with about 12,000 employees.”

But not everything is rosy. As in the world of innovation, many companies fall by the wayside, and in Kazakhstan's case, this is partly because when the time comes to really invest - beyond the initial push - everything gets complicated. “We lack depth in the financial market, which means we suffer from a lack of venture capital fund managers in the country”, - warns Magzhan Madiyev, founder and CEO of the Astana Hub and co-founder of Naimi.kz, a search website for services of all kinds that is growing rapidly in Kazakhstan. “For a startup, raising a million dollars can be easy, as we have found, but beyond that amount, entrepreneurs have nowhere to turn”, - he laments.

Journalist of the most influential newspaper in France, Le Monde, Marie Charrel, in the article "Astana takes inspiration from Dubai to create a financial center with international ambitions" discusses the influence of neighboring countries and Kazakhstan's ambitions to develop the economy in particular through support for IT startups and inviting foreign IT companies to the country:

The futuristic premises of the AIFC also house an incubator with equally grand ambitions. "Follow me," invited its boss Magzhan Madiyev, wearing a polo shirt with the Google logo. He strides through a computer coding school, a set for TikTok videos, overheated workspaces, and a trendy café, all while praising the advantages of the place: enhanced support for startups, light taxation (no taxes to pay for several years), and help with visas and installation.

"For a few years, more and more young Russians have been coming to set up their businesses in Kazakhstan," he said. "Five thousand companies or individuals working in new technologies have consulted us since the beginning of the war, and 300 have already settled in our country."

In the article "Between Russia, China, and the West: which path will Kazakhstan choose?” Nicolas Butylin, a journalist from one of Germany's largest newspapers, the Berliner Zeitung, presents his views on Kazakhstan's foreign and domestic politics, as well as on the migration of foreign IT specialists to the Astana Hub:

“The first wave of migration reached Kazakhstan in the spring. In particular, Russian specialists from the IT sector emigrated to Astana. “Almost a third of our employees are from Russia and Belarus, and our growth forecasts are enormous”, says Magzhan Madiyev, Managing Director of Astana Hub, an international startup tech park, located practically in the Silicon Valley of Kazakhstan. "For us, these are, of course, opportunities to develop Astana into a globally relevant IT hub," he says, adding: "Nevertheless, we must be sensitive to the tragedies that some emigrated people have experienced."

Read the full publication at the link: https://www.berliner-zeitung.de/politik-gesellschaft/zwischen-russland-china-und-dem-westen-welchen-weg-waehlt-kasachstan-li.279870.