Journalists of the British Forbes, The Guardian, The Times got acquainted with Astana Hub and IT startups of Kazakhstan

During the visit of foreign journalists to Kazakhstan, organized by the Foundation of the First President of the Republic of Kazakhstan – Elbasy, representatives of British business publications visited Astana Hub on October 12: Forbes.com , The Guardian, the Financial Times, the Spectator, the new statesman, time, Telegraph, Sean! Online, Fused Magician, SoEdited.com , The Mail on Sunday, International Business Times, Business Leader magazine. 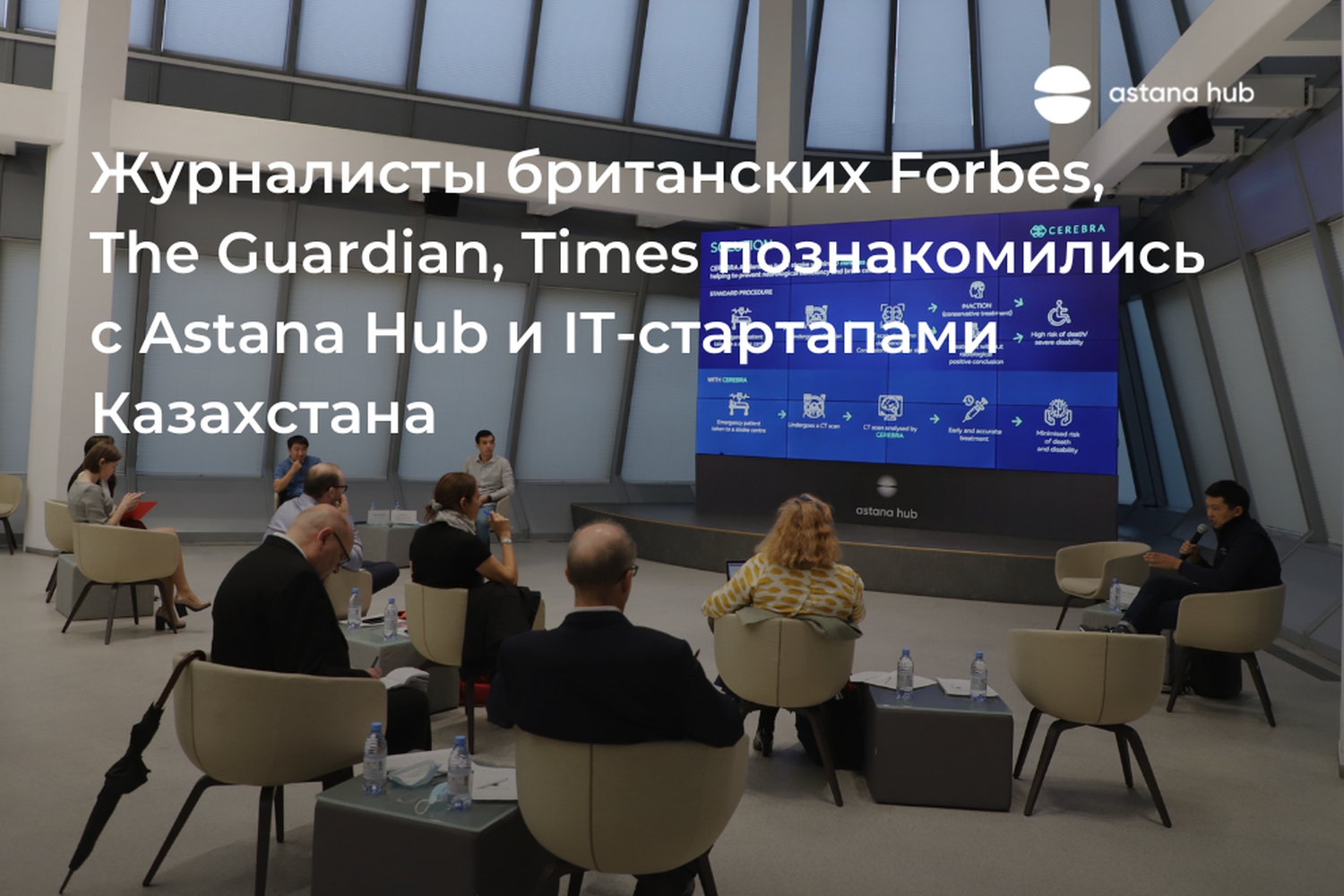 The journalists were told about the current activities and conditions that Astana Hub provides for Kazakhstani and foreign startups at different stages of development. During the meeting, residents of the technopark - Cerebra, Egistic and Parqour companies – presented their IT products.

Doszhan Zhusupov, founder and CEO of Cerebra, spoke in detail about his project. Cerebra is an artificial intelligence–based software aimed at early diagnosis and prevention of stroke. The project was launched in 2018 on the basis of stroke control services in the cities of Almaty, Karaganda and Ust-Kamenogorsk, to help neurologists, radiologists, vascular neurosurgeons and resuscitators to detect early signs of brain stroke on computed tomography (CT).

Project manager Zhandos Kerimkulov told about Egistic startup. Egistic is a software based on artificial intelligence technologies for farmers with a user–friendly web interface. The speaker noted that Egistic helps to increase crop production, get accurate weather forecasts for up to nine days, save fuel and resources, improve the quality of the workflow, as well as access information from anywhere in the world.

The solution for managing parking spaces in the city based on Parqour number recognition algorithms was presented by the startup's business development manager Ilyas Bakirov. He called the advantages of Parqour to increase the convenience of using parking due to ticket-free control and an integrated online payment system, reducing operating costs and increasing the income of owners of parking spaces.

At the end of the presentation, journalists asked questions about plans for further development of startups, as well as preferences and benefits that IT companies receive as residents of Astana Hub or participants in technopark programs.

Further, the guests also got acquainted with the work of the Alem programming school, whose training is based on the principles of the world-famous Ecole 42 network of schools. Representatives of Alem spoke about the idea of the founder of Ecole 42, Nicolas Sadirak, who, based on many years of teaching, for the first time proposed to abandon teachers whose competencies often quickly become obsolete, and applied the peer–to-peer approach of mutual learning of students. Currently, more than 120 people have become graduates of Alem, who have acquired the skills of middle/senior developers in 1-3 years of study. The journalists were particularly interested in the non-standard teaching methods and the round-the-clock operation of the educational institution.