SMART CONTRACTS ARE NOT THE FUTURE, THIS IS OUR PRESENT!

The rapid digitalization in the past two decades has caused significant changes in each individual life and entire industries. Jurisprudence, a traditional and relatively conservative sphere, was no exception.

One of the advantages of smart contracts is the use of blockchain technology, which eliminates the possibility of corrections to the already written code. That’s why smart contracts cannot be changed and supplemented by replacing any page or other manipulations that are possible when using paper media. However, there is the possibility of entering into an additional agreement or a new contract with different conditions.

It is also worth emphasizing the simplicity of a smart contract creation which does not require the involvement of a lawyer on an ongoing basis. Moreover, code language is understandable for people without a law degree.

At the same time, in case of violation of the terms of the contract, sanctions can be applied immediately, without negotiations, involvement of any intermediaries, or litigation. Therefore, the automatic fulfillment of contractual obligations increases the level of reliability and trust between partners. Considering that both parties of the contract know exactly the consequences of non-performance or improper performance and the inability to resolve the dispute in other ways, the parties take their obligations much more seriously.

Thus, the use of a smart contract reduces transaction costs for the contract parties and has positive effects on the reliability and fulfillment of contractual obligations.

According to the review of open sources and analytical materials on the Internet, there is not a specific list of countries where smart contracts are separately recognized as a form of transaction. However, it is known that in December 2017 smart contracts were officially recognized in the jurisdiction of the Republic of Belarus. At the same time, many countries have the possibility of making a transaction in electronic form, which covers the mechanism of smart contracts, but does not distinguish it into a separate category.

Also, Article 6 of the Law of the Republic of Kazakhstan dated January 7, 2003 No. 370 “About Electronic Document and Electronic Digital Signature” provides the following principles for electronic document management which is carried out in state and non-state information systems:

It is considered in this article, that there may be public or private information systems, including blockchain systems for smart contracts, where electronic document management is carried out in any field of activity.

At the same time, it is worth paying attention once again that in Kazakhstan there is no separate concept of a “smart contract” with its own regulation procedure. For example, paragraph 9 of Appendix No. 1 to the Decree of the President of the Republic of Belarus[3] “On the Development of the Digital Economy” provides that a smart contract is defined as “a program code designed to operate in a register of transaction blocks (blockchain), another distributed information system for the purpose of automated execution and (or) execution of transactions or other legally significant actions”.

Considering that there is no concept of “smart contract” in national legislation, in case of disputes between the parties, there is the issue of interpreting the provisions of a smart contract for the automatic execution of conditions.

Based on the above, smart contracts are a program code or algorithm in the blockchain system, agreed upon between the parties, and which contains the essential terms of the transaction, such as the subject, rights, obligations, terms, cost, and liability. The compilation and execution of a smart contract is a fully automated process and it is carried out according to the written code, which cannot be changed due to the peculiarities of the blockchain system.

Smart contracts are not recognized as a separate form of transaction in the Republic of Kazakhstan. However, there is a prepared basis for the implementation of such contracts, because the legislator conceptually recognizes that transactions can be made electronically in private information systems.

We believe that if an electronic digital signature was integrated into the smart contract blockchain system, such transactions will have legal force, in accordance with the legislation of the Republic of Kazakhstan. For instance, in this direction, the legislator in a pilot mode should consider the possibility of recognizing smart contracts for transactions with digital assets and simple contracts for the supply from warehouses of large retail stores. At the same time, there is definitely a space for improvement in national legislation in this direction.

Read the Article in Russian 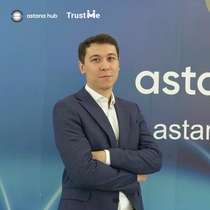